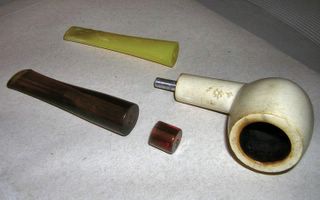 Quite a while ago, a friend asked me to swap the stem out on a pipe that he had. He wanted the stem off his favourite pipe transferred over to a new bowl. I did once have a penchant for pipe smoking. Loved to sit back, draw on some dark, cherry scented tobacco and watch re-runs of the late Jeremy Brett playing the great Sherlock Holmes. I've long since given up smoking, but packed away somewhere in a long-mislaid box sits my favourite pipe...

Anyway, the project was always at the back of my mind. I finally got around to looking at it seriously. I found to my dismay that the stem would not fit in the micro-lathe as planned. Too wide for the spindle bore at the mouth-piece; not good.

The first order of business was to lop off a piece of the barrel to bring it in line with the overall length. A razor saw made short work of this. Next was to bore out the stem to the diameter of the bowl connector. The "old favourite" was not designed for inline filters, so it had quite a small diameter interior.

I decided that the drill press was the only way I was going to get the stem bored out with the lathe being unsuitable. I gradually stepped up the diameter of drills until I managed a tight slip-fit over the connecting tube. Sounds easy, but whatever material the stem was made from did not like to be drilled. It screached and wailed. It grabbed the drill bits and stuck them fast. Beeswax was no help, either.

Suffice to say that I did manage it, but at the expense of a few scratches on the stem. Some 400 and 600 wet paper and the Dremel polishing wheels thankfully removed the marks. I was originally going to shave the outer diameter of the stem down a fraction to match the bowl's stub diameter, but I was concerned with the way the material reacted to the drills. I visualised large flakes of "whatnot" breaking off and ruining the outer surface.

It's done and it's functional. It even sits nicely in the hand. Not the sort of task I had envisioned when I took up the machining vocation, but a good learning experience, nonetheless.