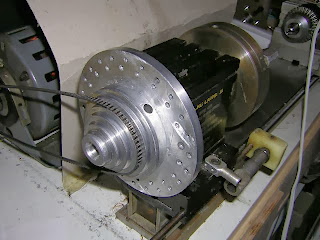 The plate was made on a large milling machine using a dividing head. Sure, I could have done it the hard way by dividing the circumference of the disc into equal parts, but I had access to the big machine and the head. Dad always said I was good at "energy conservation".

Ran into some difficulties getting the first plate (I made more than one try, yes) concentric on the darned pulley. After several head scratching moments, I discovered that the stepped shoulders on the original mandrel I made up were not concentric. A new mandrel solved the problem.

The plate is held on the pulley using three 1/4"-20 flat head Allen bolts, countersunk into the pulley back. I have two spare plates in case I need other divisions, like 7 or 13, for some future project.

I could've sworn I'd made the pulley with 24 and 25 holes in case I needed to make up some sort of micro-adjustable feature using a 40 tpi thread at the 25 div option. Those spare plates will come in handy...